Lib Dems on "battle stations" for next election 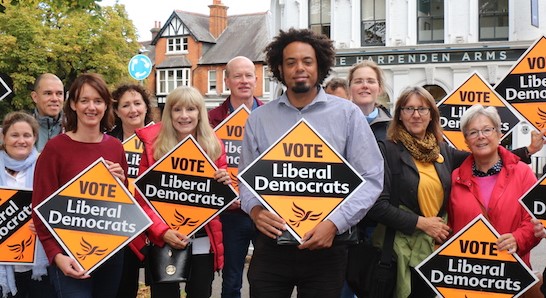 The Liberal Democrats are now on “battle stations” for the next election in Hitchin and Harpenden, as the party looks to replicate its stunning by-election wins in North Shropshire and Chesham and Amersham in dozens of marginal Conservative seats across the country. Ed Davey said the party is preparing to "turn the Blue Wall yellow.”

The party is beefing up its ground campaigning ability in areas including Dominic Raab’s constituency of Esher and Walton in Surrey, Steven Brine’s seat in Winchester, and William Wragg’s Hazel Grove, all areas where Conservative MPs are defending wafer-thin majorities. Here in Hitchin and Harpenden, the party only needs a 6% swing to capture the seat.

The party’s campaigning blitz will include a new fighting fund being launched this week, which will take donations to expand ground operations in key marginal Conservative seats.

The party has also set up a crack team of battle-hardened activists who played a key role in both the Chesham and Amersham and North Shropshire by-election wins. The activists are being sent to key ‘Blue Wall’ seats to train up fellow campaigners ahead of the next election. The top campaigners, some of whom knocked on over 1,000 doors each during the North Shropshire by-election, will also regularly feedback to senior figures in the party on key issues coming up on the doorstep.

Finally the party is holding a ‘Blue Wall summit’ this year with activists from around the country, to learn from its campaign by-election successes and how to repeat them in marginal Conservative seats across the country.

"The North Shropshire by-election confirmed the Liberal Democrats are back as a formidable campaigning force in British politics, and that millions of disaffected Conservative voters are looking to us as an alternative.

"We are now on battle stations and getting ready to turn the Blue Wall yellow at the next election.

“Our thousands of campaigners are buoyed by our stunning wins in former Conservative heartlands, from Shropshire to Buckinghamshire.

“We will now be looking carefully at how to replicate these stunning wins in dozens of marginal Conservative seats across the country.

“Last month showed the Liberal Democrats are the only credible challengers to the Conservatives in their traditional heartlands. There is no route to removing Boris Johnson's Conservatives from power without us winning many more seats.”